Today, I busied myself with removing the dinette covers and washing them, and with trying to figure out why the dome light in the cab won’t shut off after closing the cab doors. Of course, I consulted with Google on the matter, and found out that these vans have a chronic dome light problem.  I lubricated the latches on both cab doors and slammed the doors repeatedly, per someone’s YouTube instructions, to no avail. Luckily, our dome light has an on/off switch, so it shouldn’t be too hard to remember to use the light as needed.

Yesterday, I ordered replacement led bulbs for all the light sockets in the coach from Amazon and received them today.  After installing them, we discovered that one of the double ceiling fixtures doesn’t work.  Tonight, once it is dark, we’ll see if the led replacements are an improvement over the old incandescents.

The previous owners installed luxury vinyl tile in the coach, but seemed to have covered over a tie down in the floor that was meant for a safety strap for the dinette slide.

This has me concerned.

We may be crawling under the coach to see if we can find the spot where the recessed tie down was located to see if it is still there or to reinstall one. We have no experience with rv slides.

We intend to go on a few shake down camping trips in the next few weeks to work out any kinks in preparation for a trip down to Mexico in November.  We also plan to install a new fantastic fan, 2-3 solar panels, and a cb radio since we will be traveling with seven other vehicles. 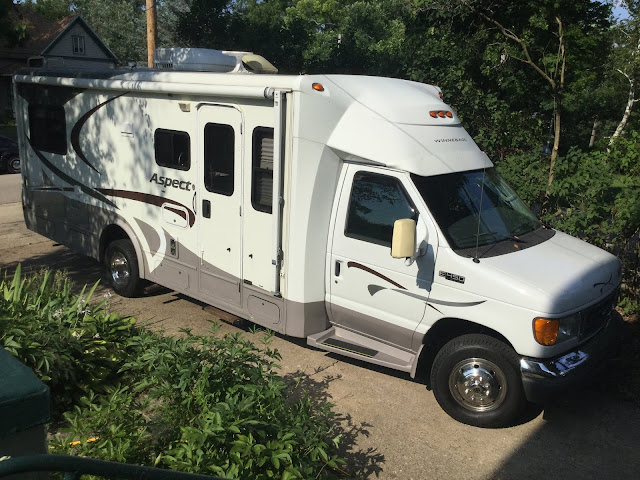