This morning, we walked to the station in Creel to catch the 1115 ChePe train through Copper Canyon to our ultimate destination of El Fuerte.

Wikipedia gives a short synopsis of the train and its route:


“The most popular way to view Copper Canyon is by train, as the Ferrocarril Chihuahua al Pacífico or ChePe, runs along the main canyon called Canyon Urique, between Chihuahua and Los Mochis, on the Gulf of California.
The Chihuahua al Pacifico began in the late 19th century. The revolution, lack of funding, and the overall difficulty of building a railroad over such terrain hindered its completion until 1961. The railroad comprises 405 miles of rails with 39 bridges and 86 tunnels. The total trip takes approximately 15 hours and passes through towns, as well as the towering cliffs of the canyons. Along the railway, many Tarahumarans lay out their food, crafts and other wares for sale.
Mexico established the Parque Nacional Barranca del Cobre (Copper Canyon National Park) to showcase this remote area. The park is located in the municipalities of Batopilas, Bocoyna, Guachochi, and Urique.
The Basaseachic Falls National Park around the Basaseachic Falls is located within the canyon area.”

We boarded the train just before noon and opted for one of the Clase Economica train cars. Two one way tickets to El Fuerte cost 1600 pesos, approximately $88 US. The journey lasted about eight hours, and though it was somewhat overcast, we managed to get a few nice pictures of the day, especially when we stood on the platform between train cars.

The destination train station was located seven kilometers from El Fuerte, and due to the late hour, we took a taxi to the Hotel Franco El Fuerte, a very basic and clean accommodation near el centro. After checking in and dropping off our bags, we walked a few blocks and settled on eating at the Restaurante Diligencias. The restaurant had good shrimp from the Gulf of California that many of the group members enjoyed. 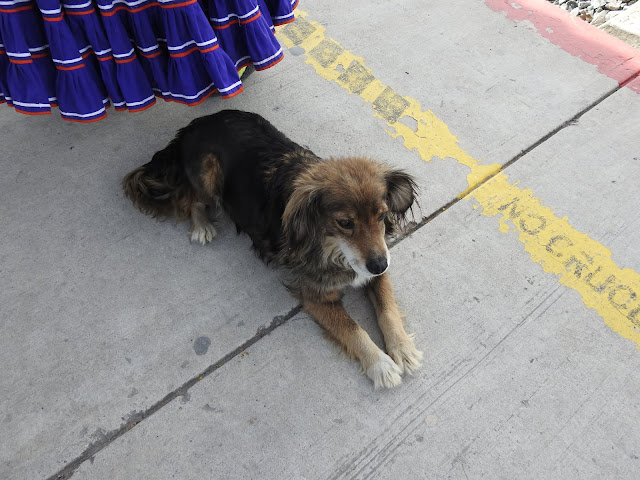 This sweet doggie greeted us at our campsite when we arrived on Monday, and has followed many of our group members on their walks through town.  This morning, she followed us to the train platform. I took several pictures of the dog and happened to catch this image as one of the many indigenous women gathered at the platform passed our group. I am not certain but I assume that the women and their children, along with a few men were members of the Raramuri.


“The Rarámuri or Tarahumara are a group of indigenous people of the Americas living in the state of Chihuahua in Mexico. They are renowned for their long-distance running ability.
Originally inhabitants of much of Chihuahua, the Rarámuri retreated to the high sierras and canyons such as the Copper Canyon in the Sierra Madre Occidental on the arrival of Spanish invaders in the 16th century.[1] The area of the Sierra Madre Occidental which they now inhabit is often called the Sierra Tarahumara because of their presence.
Estimates put the population of the Rarámuri in 2006 at between 50,000 and 70,000 people. Most still practice a traditional lifestyle, inhabiting natural shelters such as caves or cliff overhangs, as well as small cabins of wood or stone. Staple crops are corn and beans; however, many of the Rarámuri still practice transhumance, raising cattle, sheep, and goats. Almost all Rarámuri migrate in some form or another in the course of the year.
The Rarámuri language belongs to the Uto-Aztecan family. Although it is in decline under pressure from Spanish, it is still widely spoken. In the language, the term rarámuri refers specifically to the men, women are referred to as mukí (individually) and as omugí or igómale (collectively).” 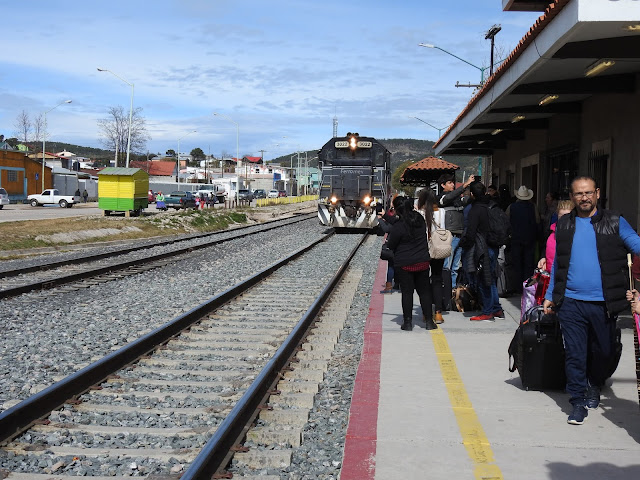 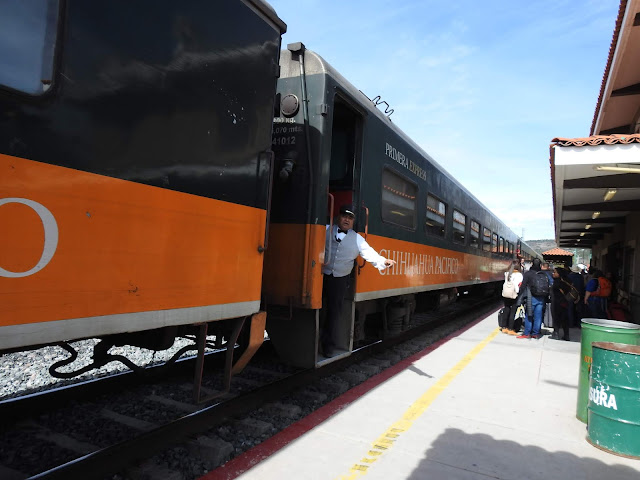 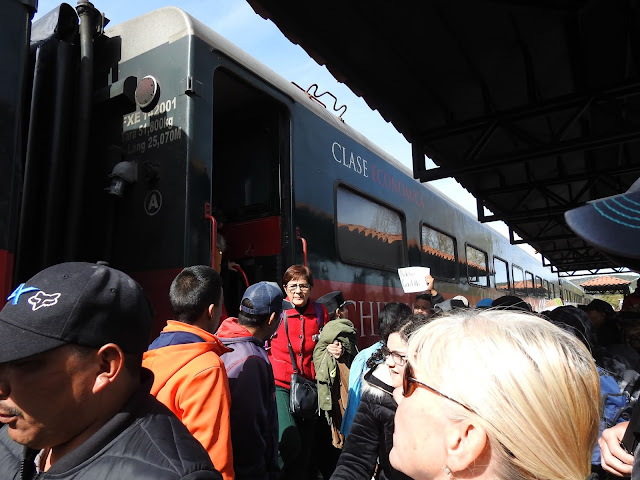 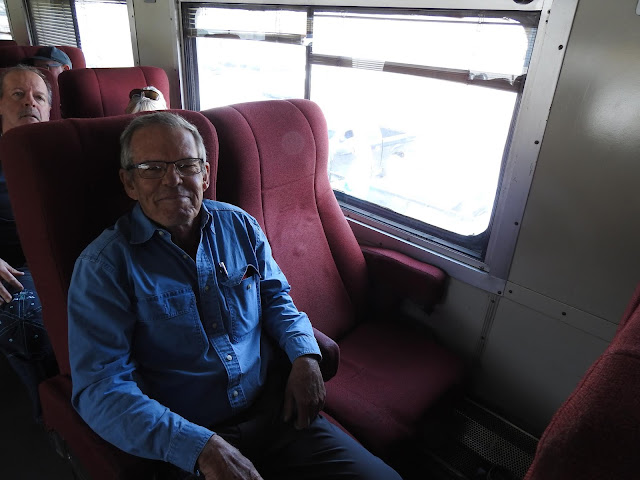 Larry settles in for the ride ❤️ 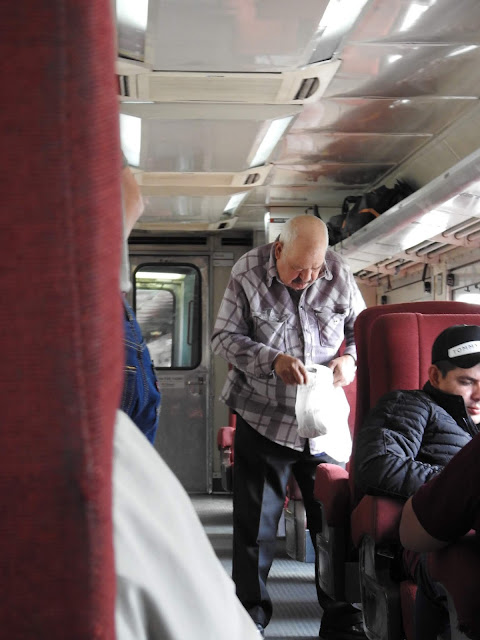 This man circulated through the train taking photos of tourists, developing the photos, inserting them into a plastic key fob, and selling the fobs to tourists.
Prior to our departure, Ruth and Kevin mentioned that they had had a key chain made by a man on this same train five years earlier. 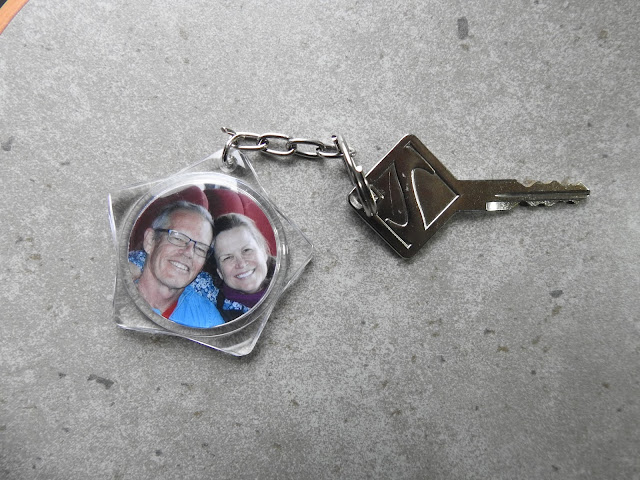 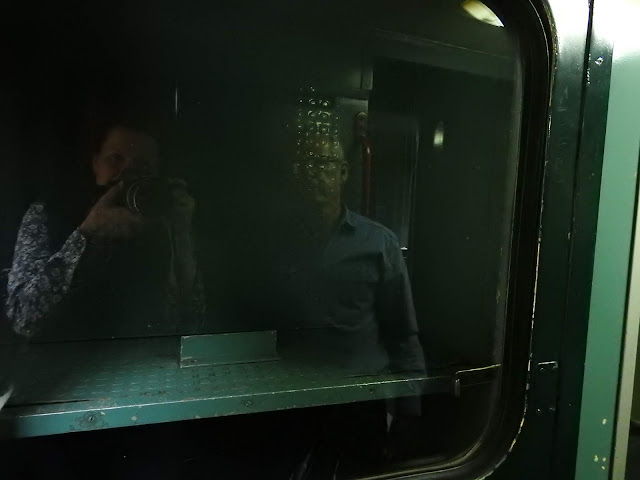 Standing on the platform between cars, waiting our turn to get a few photos.  Many of today’s photos were taken through the train windows instead of from the platform. 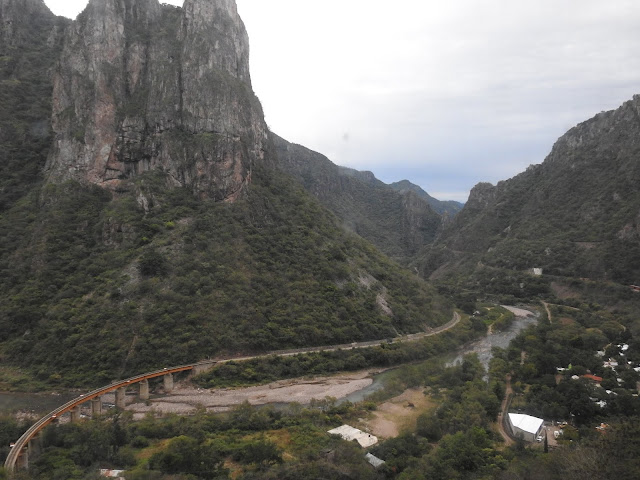 Part of the loop that is drawn on the map at the end of this post. 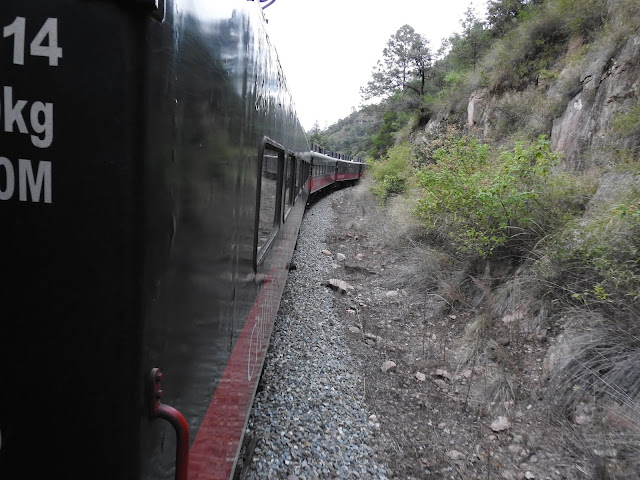 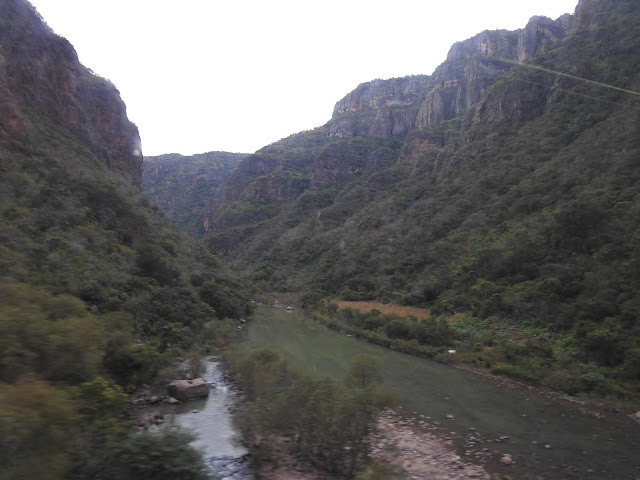 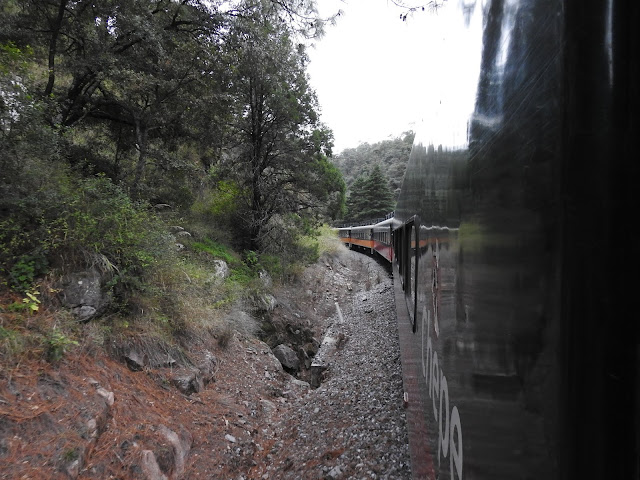 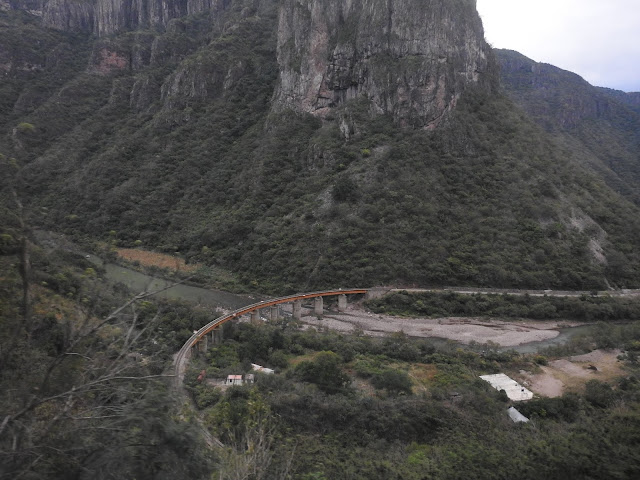 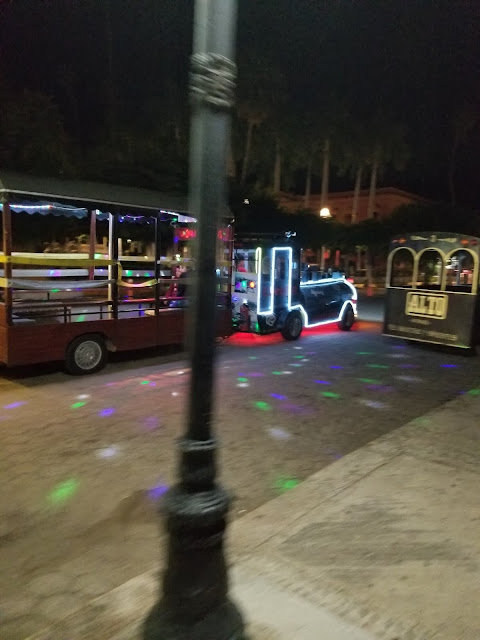 A not very good shot of a party bus that was playing festive music as it circled the square in El Fuetrte. 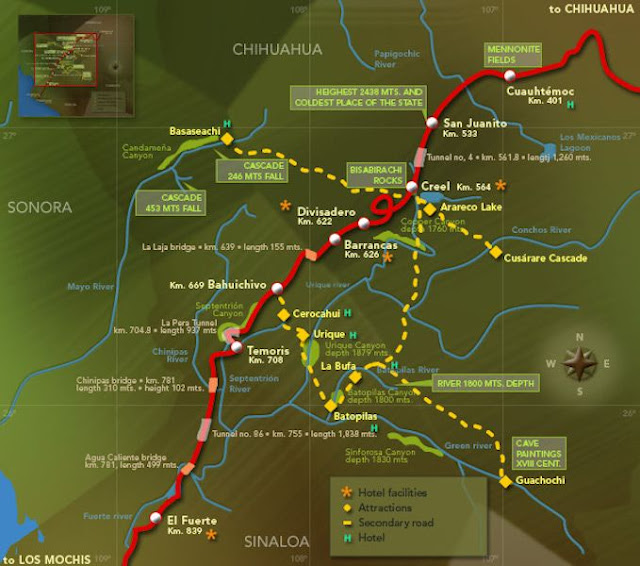 I attempted to download a Google map showing our train route, but for whatever reason Google would only establish a car, bicycle or walking route between Creel and El Fuerte. So I downloaded a map from the El ChePe website. On this map just south of Creel is the train loop that I attempted to photograph.