The rain started in earnest in the early hours of Tuesday morning.  We woke up at around 530, dressed, and asked the hotel clerk if there was someplace we could get a coffee and maybe a pastry. He directed us to an OXXO about five blocks away.

By the time we ventured out, the streets were beginning to flood and we had to zig zag from the sidewalk to the street to avoid soaking our shoes.  Once we arrived at the OXXO, we stocked up on a few pastries and two cups of coffee, which, to my surprise, was pretty good!  (I should add that in the little towns where we have stopped, the coffee drink of choice on the shelves of small tiendas is instant, which I will drink in a pinch; luckily, we have enough ground coffee to last until the next major shopping opportunity in a week or so, fingers crossed).

The taxis we had hired were scheduled to arrive at 730 so that we could meet the 815 train.  The first one to arrive, a Chevy Suburban, pulled up under the portico of the hotel so that we could load ourselves and luggage without getting too wet. The Suburban was then driven into the street to load a few of us into the second taxi, a Mercury Marquis (or Ford equivalent, I wasn't paying close attention), because the Mercury (Ford, whatever), sedan could not pull into the portico due to the river of water going down the street in front of the hotel.

Loading the second part of the group was briefly interrupted when the driver of the Mercury indicated that he needed his battery jumped.  The two drivers accomplished the jump in record time, (really! It was done in under 30 seconds!), and all were on their way to the station.

Once we arrived at the station, we huddled under a covered area with quite a few fellow train travelers, who were joined by at least three more bus loads of people wanting to ride the train.  The train's arrival was greeted with cheers!  I briefly worried about getting a seat on the train, given that El Fuerte is about 1-2 hours north of the end of the line and we didn't know how many people were already on the train, but my worries were for naught. Most of the people waiting along with us were headed for first class seating, and we were headed for the economy seats.

Larry and I spent most of the train ride reading, and I was even able to fall asleep as the seats were comfortable, and the rocking motion of the ride was mostly gentle.  We arrived back in Creel and had dinner at a local restaurant, Veronica's, and celebrated Owenita's birthday during happy hour.  Ruth made a delicious Black Forest cake for Owenita, a fitting close to the day. 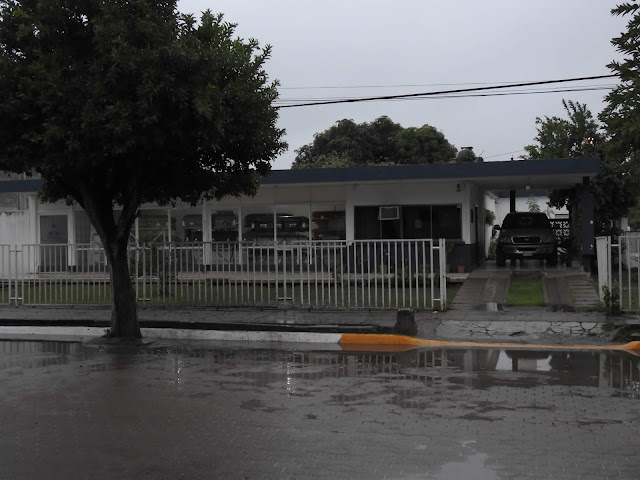 Perhaps you can see the caskets on display in the funeral home window across the street from the hotel where we stayed. I took this photo just before we departed and you can see how flooded the streets were.

Here's a short video that Larry made on his phone from the train platform: