Thanksgiving Feast and a Visit from the Soladores

We awoke to more rain on Thanksgiving, but at least it wasn’t the torrential rains of Wednesday. The winds were still pretty bad, though, gusting up to 40mph.

I didn’t take any photos on Thursday. We walked downtown in the afternoon and had another meal at Simple, then we ran a few errands and picked up more carrots for a dish we were making as our contribution to the Thanksgiving potluck. The meal was very enjoyable! In addition to roast chicken and various side dishes, we even had gravy and stuffing, thanks to Bob and Denise, and some cranberry sauce from Ruth!

Friday morning the rain and winds had subsided enough for Larry to address the slide issue. After retracting and extending it a number of times, he determined that the weld had broken on a small but crucial piece of metal that guided the right hand part of the slide on its rail. We had heard from Kevin that there were a few welders in the area, and Roger knew where they were located, so he and I walked for a few blocks over to what looked like the industrial part of town and after explaining what we needed to the fellow in the first shop we came to, we were directed to walk across the road and talk to Oscar, who just happened to be passing by in his pickup.

Roger and I managed to communicate that we needed a solador movil, though we were willing to drive the camper over if need be. Oscar said someone would be over in 15 minutes, and sure enough, two young men arrived with a portable welding setup, and within the hour, we had a working slide. They asked for 200 pesos, about $10! Larry gave them 250 pesos, which still didn’t seem like enough for the help they gave us.

Once that need was addressed, we filled the water tank, gassed up, and set off for Divisadero Barrancas, about an hour away. I will let the pictures speak for themselves. 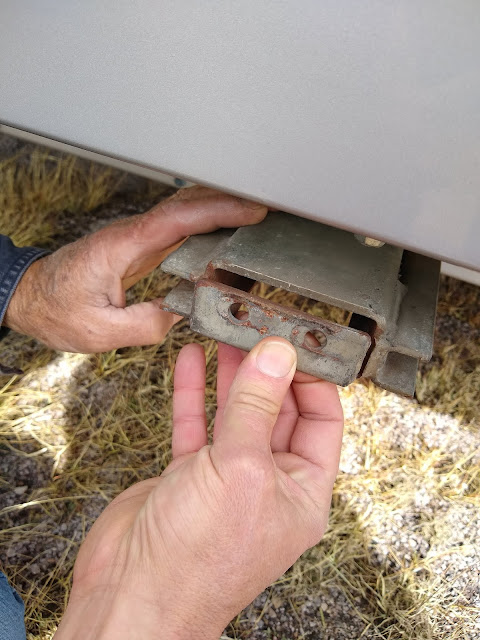 Here's the rectangular piece that broke off, causing the slide out room to veer to the left towards the refrigerator. 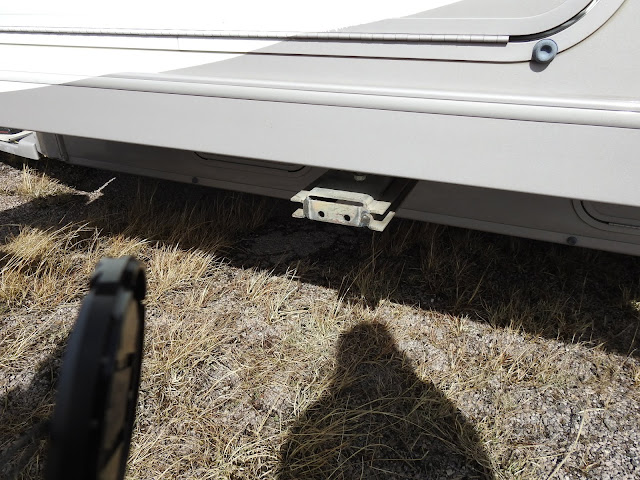 And here it is welded back onto the rail. The men did a neat job. 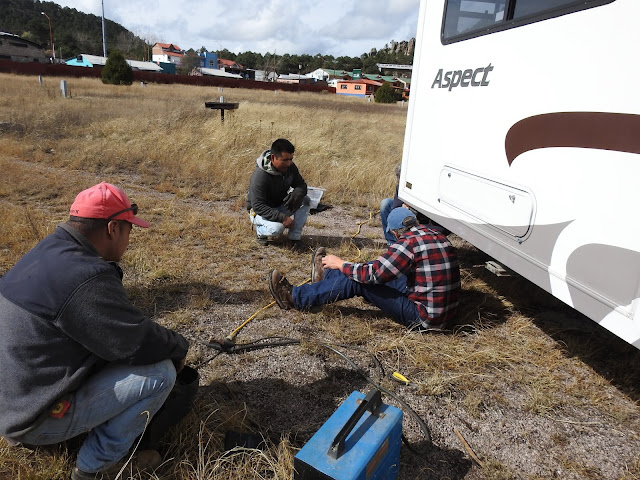 Roger and Larry initially thought that it might be a good idea to have the men reinforce the weld on the other rail, but that plan was abandoned after it proved too much of a hassle. 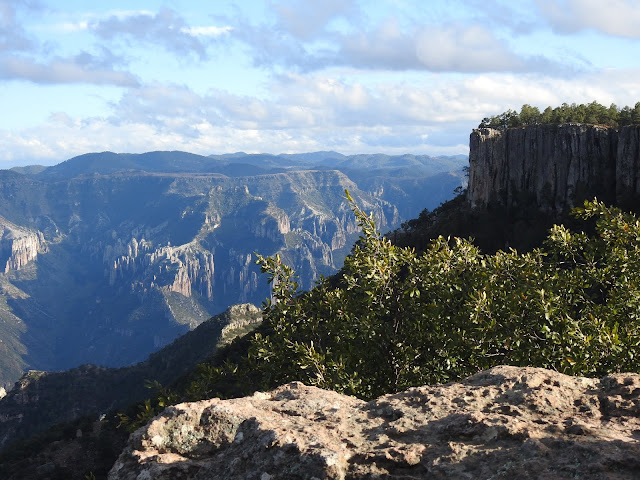 One of our first views of the Divisadero. 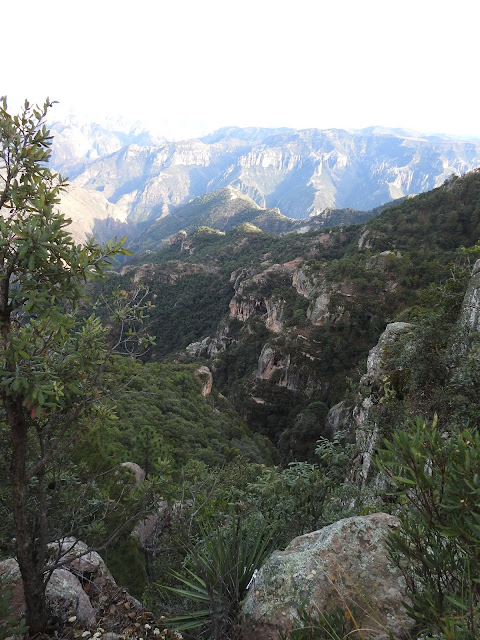 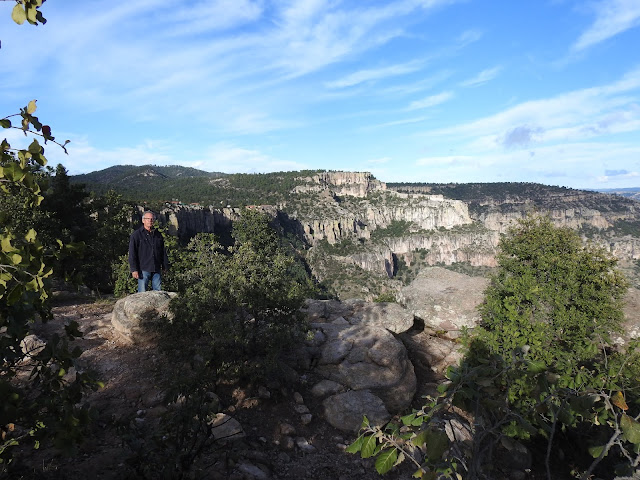 We are camped along this rim! All our rigs face the precipice, a really remarkable place to camp. 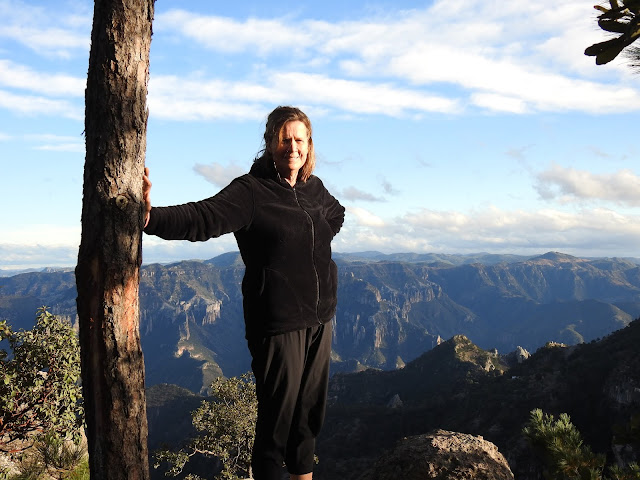 Me, looking a little worse for the wear : )
The views were a reward for the hectic day! 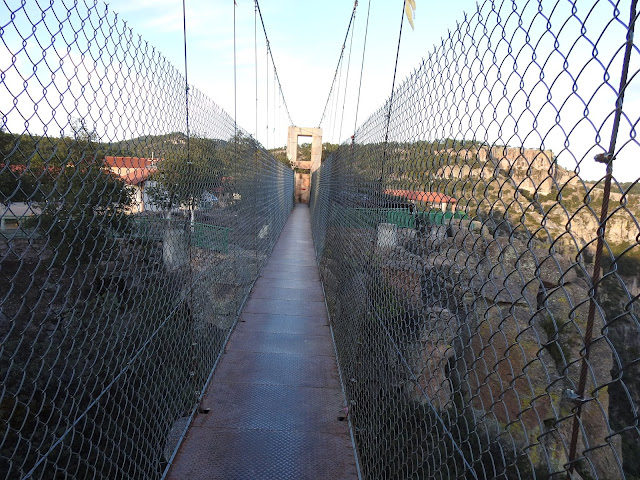 We crossed this metal bridge to get over to the train station. There is a hotel and restaurant overlooking the canyon. I will post more photos from Larry’s phone later today.