The Dogs Run the Town

But no one seems to pay them any mind.

As soon as we arrived at this old KOA campground, a few dogs came trotting over to greet us, probably hoping someone might toss some food at them too. Once word got around dogland, more dogs came to greet us today. Whenever any of us went towards town, the dogs would follow. Last night, two dogs lay on our mat outside our door and settled in for the night. Mona reported to me this morning that one of them nudged itself under our mat to keep warm.

Anyway, the dogs are charming, and one or two are particularly expressive.

Today, most of the group went on a long walk along the ridge that frames Creel. Larry and Roger opted to ride mountain bikes in an area further east of where the group walked.  Afterwards, Larry and I rode our bikes to a small grocery store just up the hill to pick up some food for our train trip to Copper Canyon tomorrow. We spent 132 pesos on a dozen eggs, three bread rolls, a package of tortillas, four carrots, a zucchini, three bananas, a bottle of mango juice and a small bottle of milk, about $6.50 usd.

I have been using too much data inadvertently. Today I received a warning that the 12 gb I had purchased back in Chihuahua when I bought my Telcel chip had been reduced by 75%, mainly because I have been using my phone as a hotspot, and I had neglected to make the necessary adjustments to my phone, iPad, and Mac. The 12gb cost 500 pesos, about $25usd, which is what I pay for a single gigabyte back in the US, so although I hate to have used up all that data so stupidly, I am glad that it is a relatively cheap lesson. So, after our trip to the grocery, I knocked on Aron and Owenita’s door and asked Aron if he could help me trim the fat from my data diet. He graciously spent the better part of an hour adjusting settings in all our devices, and I feel ten pounds lighter!

Speaking of lessons, we all lined up outside the atm after our walk to withdraw cash for tomorrow’s train ride, and Kevin happened to warn us that one of the options the bank offers towards the end of the atm transaction is for one to accept the exchange rate that the bank was offering. Knowing no better, and perhaps thinking that the transaction might be cancelled, I accepted the bank’s rate yesterday, the first time I withdrew money  As it turns out, if you don’t accept the rate, the machine will still dispense your cash. Seemed like a bit of a dirty trick, but it is not a mistake I’ll make again.

Here are today’s photos of the hike: 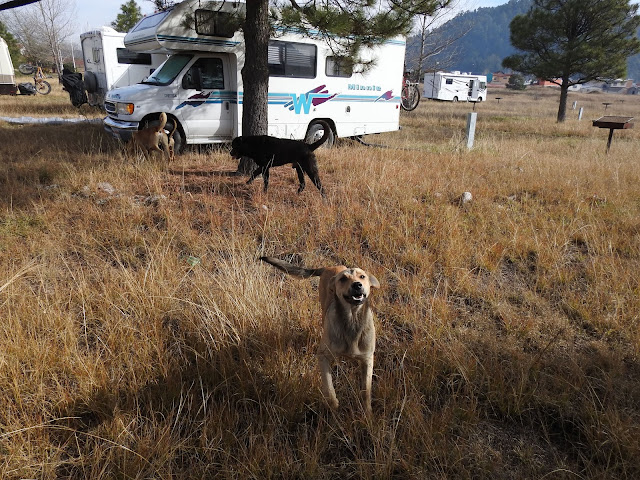 These fellows were outside our door, ready to play as soon as we came out. 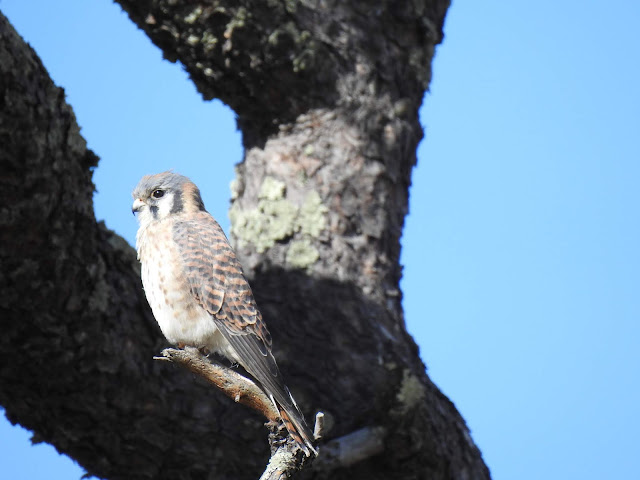 Ruth took this shot with my camera. We meant to ask Jim, a retired forest worker from Idaho, if he recognized the bird. 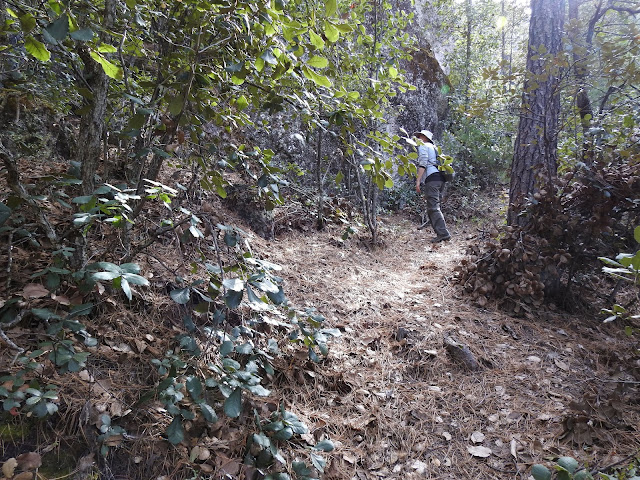 Ruth heading up the first of a few steep hills we scaled. 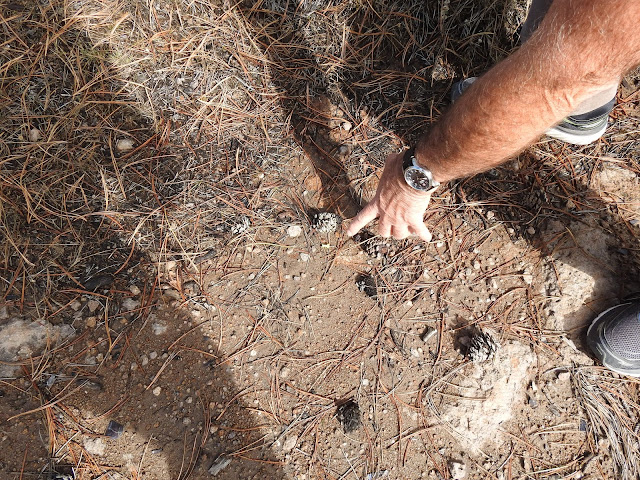 Eagle-eye Jim spotted this on the trail. 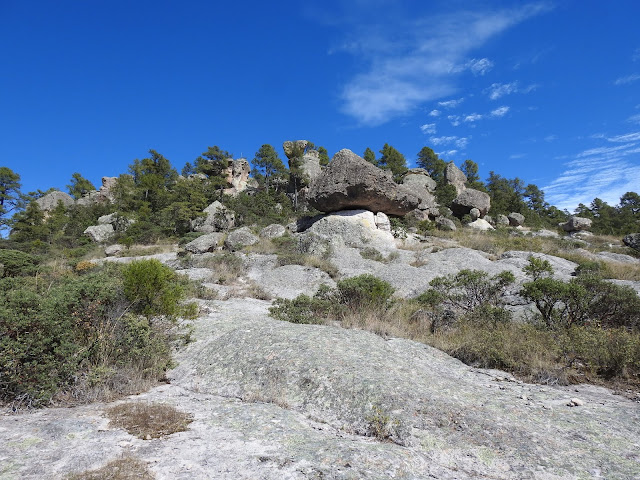 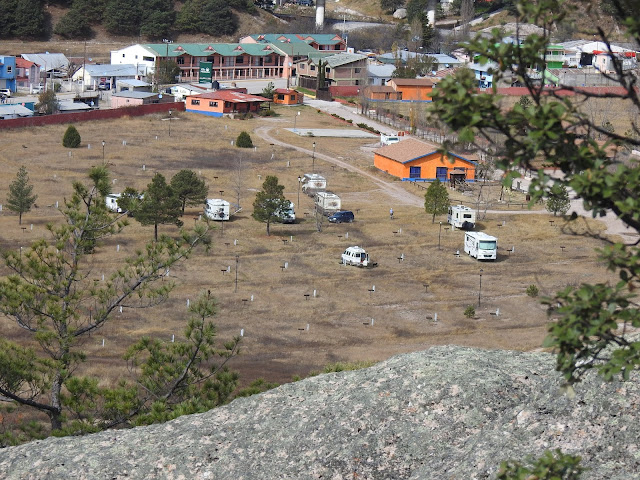 A view of the old KOA campground in Creel. Our Winnie is on the far left, partially obscured by a tree. 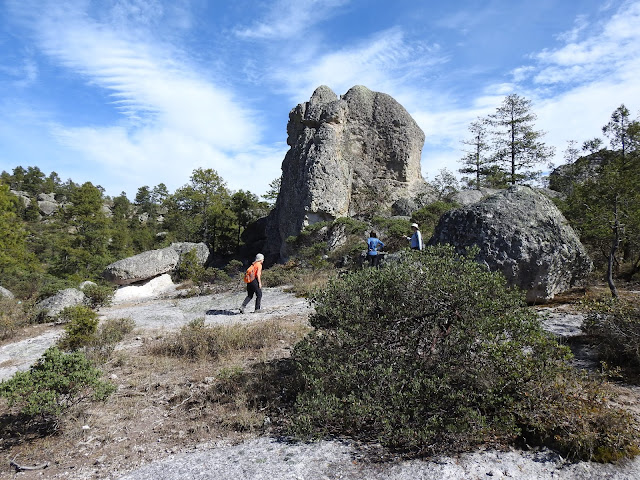 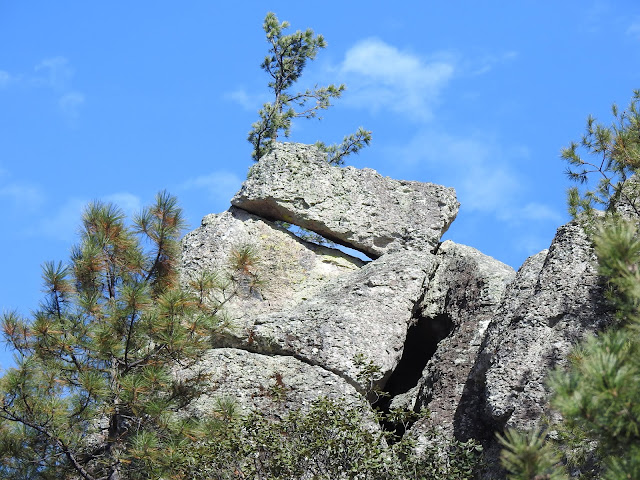 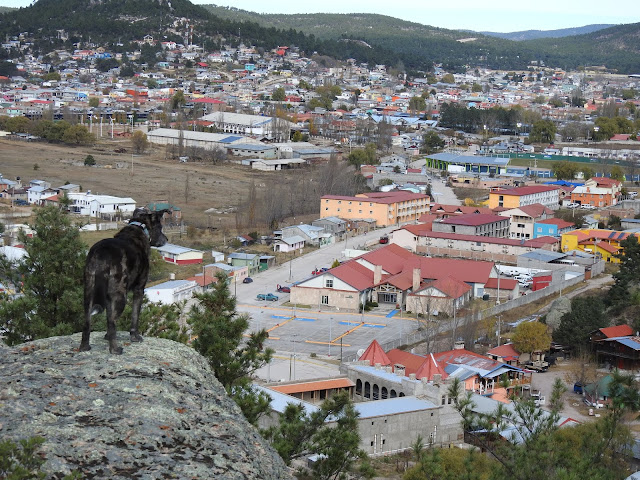 Scarlet is Bob and Denise’s sweet dog. She stood looking down long enough for Kevin and I to get a shot of her. 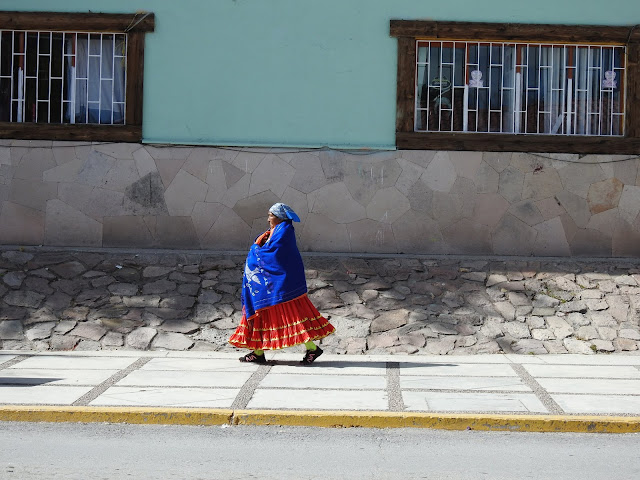 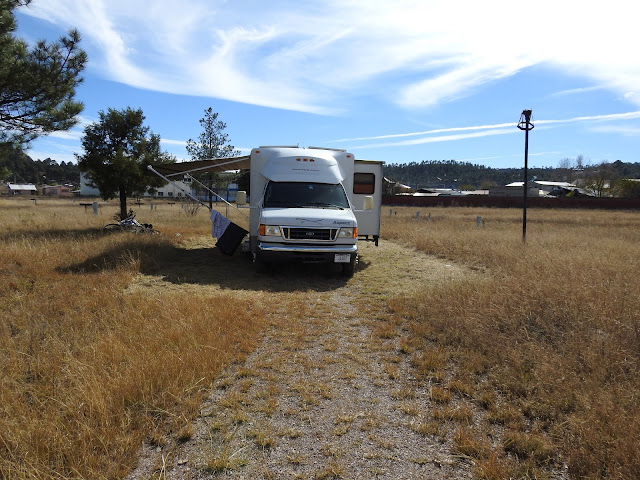 Last night, a youngish man named Mani came by during happy hour and offered to weed whack the areas around our campers. He finished four of them, and came back today to finish whacking around the remaining four campers. His English was very good, (so good that when Ruth offered a piece of cake to him last night and mentioned that it was Susie and Roy’s 28th wedding anniversary, Mani said, “Congrats!”), and when we asked him how he had learned to speak so well, he said that he had spent 16 years near Pocatello, Idaho working construction until immigration authorities revoked his green card. He moved back to Creel and opened his own construction business.